Combinations of HF transceivers and transverters provide high input sensitivity, good large signal performance, excellent phase noise values and low intermodulation distortion. Usually, the performance is much better than that of modern VHF transceivers. The high performance transverter module MKU 70 G2 is based on several decades of development and production of transverters. Its outstanding technical data makes it usable for many applications.

Technically skilled customers can set up their own 70 MHz transverter system with the transverter module and one of Kuhne electronic's power amplifiers MKU PA 4M-35W HY. The transverter module MKU 70 G2 will work with most HF transceivers, which have a transverter output port. Due to switchable input power range and connector configuration, the module is very flexible.


A temperature-compensated low noise butler oscillator generates the 42 MHz LO signal. A thermostat crystal with a 40 °C precision crystal heater is used. The phase noise of the oscillator signal is -156 dBc/Hz @ 10 kHz. This value is better than that of the HF transceivers. The oscillator output power is more than 50 mW.


In the receiver frontend a high-quality band pass filter with high selectivity is used to prevent interference  in case of multi-band operation. In the frontend of the converter there is only one low noise stage with a noise figure (NF) of 0.8 dB and an output IP3 of +28 dBm. The frontend is followed by a helical band pass filter and a matching network. A high level schottky diode ring mixer converts the signal to the intermediate frequency (IF) at 27.9…30 MHz.


In the transmit path of the transverter a second high level ring mixer with an adjustable attenuator is used. The IF input power is adjustable between -12 … +17 dBm (0.06 … 50 mW). For further power adjustments the HF transceiver can be used. At the mixer output there is a matching network and a helical band pass filter. It is followed by an MMIC amplifier stage and a second helical band pass filter. The final output driver amplifier is able to generate 100 mW output power.
Features
References
References on eHam.net
Downloads 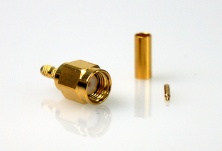